It's a happy 10th birthday to The Sarah Jane Adventures. The series launched on New Year's Day 2007 with its brilliant, colourful pilot episode - Invasion of the Bane. A series followed in the autumn, and every autumn up to 2011. 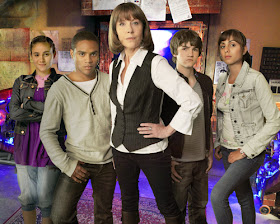 To celebrate the milestone, a group known as the Attic are reuniting as many members of the cast and crew as they possibly can, for a one-off event this July. Click here to be taken to their website.

Confirmed so far to attend are:

They'll be auctions of scripts, merchandise and other bits and bobs. All proceeds go towards children's hospice Ty Hafan.

Why don't you join them Saturday 29th July, and celebrate what remains a fantastic show!
Anthony Garnon at 1:47 PM
Share